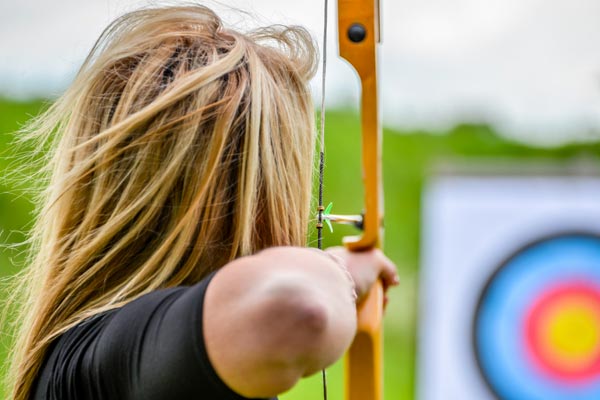 The words archery and archer come from the Latin word arcus, meaning bow or arch.

According to the World Archery Organization, archery has been around since the Stone Age and has been used as a means to hunt for food and as a weapon for war by the ancient Chinese and Egyptians.

Although archery has been used for hunting and for war, most archers in the modern world merely view and partake in archery as a sport.

As with most sports and arts, archery comes with its own set of terminology. For example, a toxophilite is a word used to describe someone who is a student or a lover of archery.

The word toxophilite is a word invented in 1545 and stems from the Greek words toxon (meaning bow) and philos (meaning loving).

The word roving is a term used to describe a highly effective method of learning to shoot a traditional bow.

Roving consists of choosing a target outside and practicing shooting said target one arrow at a time. This is a good method for beginners in archery.

The last, but most important, a piece of jargon that will be mentioned here is dry fire, which means releasing the string of the bow without an arrow notched.

Dry firing a bow will cause the bow to splinter and break, due to the tension and forces within the bow.

There are several types of bows in existence with the four most common bows being the recurve bow, the compound bow, the traditional bow, and the crossbow.

Most beginners in archery learn to shoot traditional bows first, as the bow has the least amount of parts to it and is simple to learn.

The following terminology discussing the various parts of the different bows comes from P.J. Reilly, a writer for the Lancaster Archery Supply company.

The traditional bow features the grip (where the non-dominant hand grasps the bow), the upper and lower limbs(which is the body of the bow above and below the grip), and the bowstring (where the arrow is notched and drawn back from).

The grip of the bow will have a small shelf, appropriately called the arrow rest, where the arrow will rest when it is ready to be loosed from the bow.

The recurve bow is similar to the traditional bow except it has other features that make it ideal for target archery.

Some of these features include a sight, a stabilizer, and a clicker. The recurve bow is the only bow allowed in the Olympics.

Crossbows and compound bows and more complex bows and not ideal for first-time archers.

While these bows have more parts, it is important to know which type of archery one will pursue in order to choose the best bow and get the best results possible.

For more information on the types of bows, their parts, and their capabilities, see the Archery 360 website, sponsored by the Archery Trade Association.

The Important Information to Know Before Drawing the First Arrow

Knowing the types of bows and the terminology is half the battle when just starting out in archery.

Stance and following through are also key pieces of information to have before even drawing the bowstring.

Stance is a crucial aspect of archery. If one has bad stance going into the sport, the end result will not be satisfactory.

A YouTube video from the Howcast channel goes into detail about proper stance.

Michael Peart, a member of the Great Britain archery squad, also has some important tips for first-time archers, including a guide on how to draw and fire a bow.

One of the main points to understand is to “breath easy” and make sure to follow through after firing the arrow by holding the stance.

Once the basics of archery are understood and committed to memory, the next step is to obtain equipment to practice with.

Keep in mind that archery is not a cheap sport and the best and most reliable equipment will be a bit pricier.

Bows, specifically traditional bows, can cost anywhere between twenty and one thousand dollars. The price of bows will also vary based on the bow size.

Choosing the proper bow size is calculated by determining the specific draw length, which is based on the specific user’s height.

Arrows also have a wide price range, but spending upwards of fifty dollars is not unusual, as the arrows tend to be of better quality and won’t break when fired repeatedly.

If possible, it is best to purchase arrows in packs, in the event that an arrow splinters or breaks when loosed.

A good quiver can hold several arrows without wearing down the tips and will typically run about the same price as a pack of arrows.

The target is the last essential piece of archery equipment. Targets come in a variety of sizes and shapes, from animal-shaped to competitive targets with bullseyes.

The targets are typically made with some type of foam and will cost several hundred dollars.

Getting Into the Swing of Things

Be sure to practice good habits when just starting out in the world of archery.

Remember to do proper research when something is unknown, as it is better physically and financially better to seek help before making a potentially regrettable mistake.

And lastly, don’t be afraid to connect with other archers and have a good time!