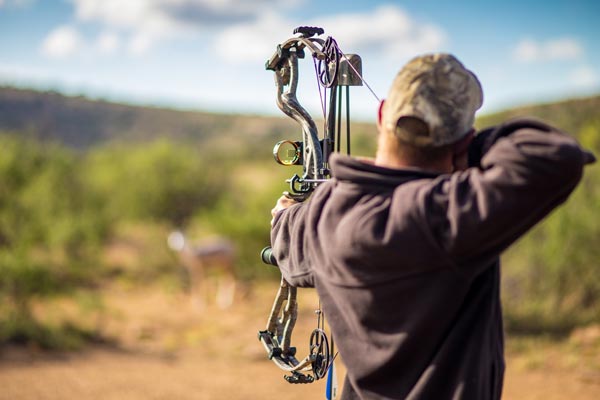 Even if a person has never shot a bow and arrow, they can discover the enjoyment of bowhunting by following these beginning steps.

The first step for an aspiring bowhunter is to become educated about the sport. There are many resources that will provide a solid foundation for a lifetime of bowhunting success:

These courses usually include two sections: a few hours of classroom instruction, followed by a field session where students receive hands-on experience.

Bowhunter Education – Since most states only offer a generic hunter education course, it is wise for a beginner to attend a second training course focused specifically on bowhunting.

The instruction will increase the new hunter’s knowledge and also provide certification that is recognized in all 50 states.

While most states do not require this specific training, there are 11 states that mandate all bowhunters be certified.

The National Bowhunter Education Foundation offers such a course both online and in the classroom.

Seventy-five percent of the training is in a classroom setting. The rest is taught in a field day.

Independent Study – The motivated beginner can learn much from studying the topic of bowhunting on his or her own.

For example, The Archery Trade Association sponsors a website that has a wealth of information for the beginner:

The Bowhunting 360website is designed specifically for the archer who is focused on bow hunting.

It includes articles and videos on how to shoot, bow fishing, hunting gear, and wildlife.

It has a special category entitled “Bowhunting 101” which is a great resource for beginners.

There are also many videos available that are helpful for the person new to bowhunter and archery, such as the Archery Safety Video which teaches important safety skills for the beginning bow hunter.

The next step a novice should take is finding a mentor. The knowledge and experience that a seasoned bow hunter possesses is the beginner’s most valuable resource.

There are several places to look for such a person:

Bow Shops – A visit to the local bow hunting shop should be the beginner’s first stop in the search for a mentor.

The staff will have valuable information on local clubs and individuals involved in bow hunting.

Often they are motivated to help the novice bow hunter, since this may result in a new customer for their store.

Archery Clubs—A 2016 U.S. Fish and Wildlife Service survey reported that over 12 million people are involved in archery across the nation.

Many of these are members of local archery clubs, so this is the ideal place to find a mentor.

Scott Einsmann, a former All-American archer at James Madison University and archery coach advises beginners to join a local club since it is a great place to connect with experienced bowhunters.

State Wildlife Office – Another good group to connect within this search is the state agency responsible for managing wildlife resources.

The state staff will often have much valuable advice for the beginning bow hunter, especially in the hunt for a mentor. Some states even have formal mentoring programs available.

One of the important steps for the beginning bow hunter is the selection of a bow. There are four main types of bows from which to choose.

The following is a brief description of each type:

This is the classic style of bow that was used in ancient hunting and warfare. Its main feature is the bow’s length, which may be nearly equivalent to the shooter’s height.

In 1991, a longbow dating back to 3300 B.C.was unearthed in the Alps. The longbow has served mankind well through the centuries since it is lightweight and simple to operate.

Some people also prefer it for its nostalgic qualities. “For classical looks and historical appeal, longbows rule.

It is also quiet to shoot and easier to draw, which are advantages when hunting. The drawback for the modern hunter is its relatively slow arrow speed. Because of this, a longbow requires much practice to develop accuracy.

It also has the disadvantage of a strong recoil which can sometimes make for shooting discomfort.

This type of bow also has ancient origins. It was used by the Roman imperial archers.

Its main characteristic is that the curvature of the bow’s arms are away from the shooter when it is unstrung.

Some modern recurve bows are “take-down” bows—the upper and lower limbs can be separated when the bow is unstrung.

This is an advantage in carrying the weapon for the hunter who must travel some distance to his hunting spot.

The disadvantage of a recurve bow is that it requires more strength to draw the arrow to shooting position than other bows, yet it has less power than a compound bow.

The compound bow is the newest version for archers. It was invented in by Holless Wilbur Allen of Billings, Missouri in 1966.

He made the bow limbs stiffer and less flexible than other bows and added a system of cam pulleys at the top and the bottom of the limbs which greatly increased the draw strength of the bow.

This resulted in an energy-efficient bow that transferred more of the shooter’s strength to the arrow. This increased arrow speed is the main advantage of a compound bow.

Another feature that hunters value is the “let-off” characteristic of the compound. As the arrow is drawn back into position, the cam pulleys reduce the amount of energy the shooter is required to supply to hold the arrow ready. This makes it easier for the hunter to remain steady while aiming at prey.

The main consideration when choosing a compound bow is to make sure that its draw strength is 45 pounds or above.

This is the mandatory minimum for a bow used for hunting in most states. The only disadvantage of a compound bow is the weight.

On average this type can weigh from six to ten pounds, depending on how it is outfitted. A longbow weighs from 1.75 to 2 pounds and a recurve bow normally weighs 3.5 pounds or less.

Until recently there were several restrictions on the use of the crossbows for hunting purposes. Yet, more states are allowing crossbows as an option for hunters.

This ancient version of the bow was man’s first improvement on the original weapon.

It consisted of turning the bow horizontal and mounting it to a stock so that it could be shot like a modern rifle.

The advantage of the crossbow was the ease of operation. While it took years to master the shooting of a longbow or recurve bow, the crossbow could be used effectively by inexperienced soldiers.

The modern crossbow has this same advantage for hunting. Because of its design, it is easier to operate and shoot accurately with a minimum of practice.

Another important advantage of a crossbow is the increased speed of its projectiles – called bolts instead of arrows.

In a field test of the latest crossbow and compound bow models, Will Brantley and two other Field and Stream editors found that crossbows outstripped the bows. On average a crossbow has 45% more energy than a regular bow.

The beginning bow hunter should only choose arrows after making his or her selection of a bow.

This is because the size and weight of the arrow depend on the draw strength and draw length of the bow.

The length of the arrow should be no more than 1” greater than the bow’s draw length.

The weight of a fully equipped hunting arrow (shaft, vanes, insert, nock, and broadhead) should be six to eight grains for every 10 pounds of draw strength.

This means a bow with a 45-pound draw strength needs an arrow weighing from 270 to 360 grains.

While lighter arrows may be used for target practice, heavier the arrows that have greater penetration power should be used when hunting.

After all these preliminary steps, it is time to practice shooting the bow on the range.

For a hunt planned in the late fall, a beginner should plan on starting in mid-summer to develop basic archery skills.

A great help for the beginner would be a membership in a local archery club and the investment in taking a basic skills class under a certified instructor.

Such a course will cover safety practices, determination of eye dominance, basic shooting techniques, grouping and consistency, and range courtesy.

Once a beginner has developed a basic skill set on the archery range, it is important to spend time practicing under simulated hunting conditions.

This could be as simple as going out to an open field and target shooting or as extensive as setting up 3-D animal targets in various positions and shooting from a tree-stand.

Regardless of the environment, the beginner should keep in mind several basics while practicing:

The Form is Important

The essential elements of good form that the beginner learned in the archery lessons should be consistently followed each practice session: proper grip, appropriate draw length, correct release, and good follow through.

Shoot for the Right Distance

The range of a bow is much more limited than a firearm, so the practice distance is correspondingly less.

Chuck Smith of the Rocky Mountain Elk Foundation recommends that beginners practice shooting at targets from 15 to 25 yards away. He stresses to novice hunters that the bow is a weapon for close range.

Though a beginner might assume the more time spent in practice is better, experts recommend strategically limiting target practice.

Since accuracy is the goal, the beginner wants to shoot at a slow and steady pace during the session.

It is also important not to extend the session too long. This can lead to fatigue, which may lead to developing sloppy shooting habits.

Due to a bow’s limited power, it is vital that a beginning bowhunter becomes familiar with the animal to be hunted.

For the hunt to be successful, a bowhunter must set up in a location that will bring the animal within range for a lethal shot.

This means a hunter must know the feeding and bedding patterns of the prey in order to pick the prime spot from which to hunt.

Determining the ideal range will differ for each hunter, depending on the bow used and the skill level of the archer.

Experts suggest that a hunter determines his “sure-kill” range by measuring accuracy with an 8-inch target.

The effective range should be the distance at which the hunter can consistently hit that target. “…The bow is a short-range hunting tool.

Depending on the circumstances, the maximum distance is 30 to 40 yards,” recommends Bowhunter-Ed, a private education organization that works with the Michigan Department of Natural Resources.

“Nothing clears a troubled mind better than shooting a bow,” wrote Fred Bear.

In a world with increasing stress and anxiety, it may be the ideal time to learn the ancient skill of bowhunting.